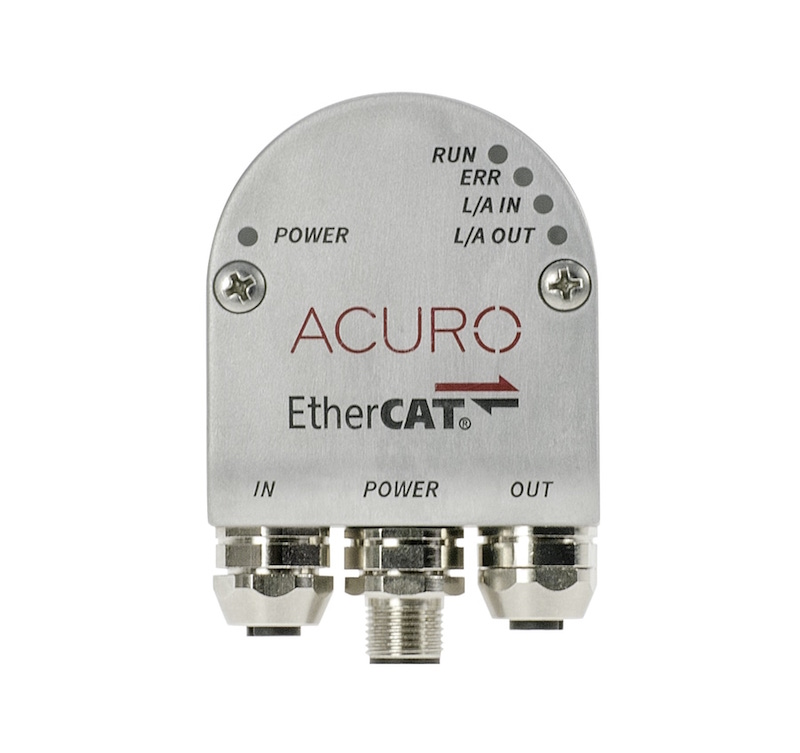 The application / function are as follows:
The new opto-ASIC platform extended throughout the ACURO line now provides advantages that make absolute encoder technology applicable to a wider range of motion control and servomotor feedback applications. The new ACURO 36 and ACURO 110 models extend the ACURO series to applications in the small motor, packaging and textile machinery, and medical equipment sectors.

Absolute encoders improve machine reliability because, unlike incremental encoders, they always know their position, even at startup or after a power failure. DICG technology and manufacturing breakthroughs have reduced the cost of absolute encoders, so that they are now finding acceptance in every kind of application, not just the high end, demanding few.

Low-profile gears shrink size, increase reliability – The ACURO 36 is one of the few encoders that use a gearbox instead of a battery to provide multiturn resolution. The low-profile mechanical gearbox allows a lower installation height than battery-buffered counter solutions.

Thin as a dime, the gear set facilitates an installation depth of just 31 mm – one of the shortest in the industry. Small encoders are especially important to motor OEMs, who are under pressure to continually shrink their designs.

In addition, the gears eliminate dead batteries as a potential source of downtime, and eliminate the need for battery maintenance. Running at speeds up to 12,000 rpm, the gear set is nonmagnetic and immune to interference in such applications as welding or motors equipped with powerful brakes.

New OPTO-ASIC generation platform:
The ACURO 36 and ACURO 110 encoders are based on DICG’s new generation platform based on opto-ASIC electronics, into which multiple functions are highly integrated. ACURO was engineered for field dependability, re-designed from the predecessor’s 150 parts and five circuit boards to less than 30 parts and just one board. Reliability is enhanced by minimizing the number of printed circuit boards and soldered connections. The new electronics also enabled Danaher designers to increase the temperature specs on the motor drive version to an industry-leading 120 degrees C – ideal for today’s smaller, hotter running motors.

The ACURO Series has the lowest current draw of any absolute encoder, at just 45mA for the single-turn version and 85mA for the multiturn version.

The new platform is consistent across DICG’s manufacturing plants worldwide. Globally based companies are assured of receiving the same design encoder no matter which region it was manufactured in. This allows company managers to reduce costs through component standardization.

The most communications protocols -The ACURO Series encoders can communicate with any type of control system using common formats, ranging from parallel to such field buses as profibus, DeviceNet, CANopen, CAN Layer2 Interbus, and SSI.A 2048-step sine/cosine signal (1Vpp) is also available for dynamic control. No other encoder offers as many communication options.

As BiSS is all digital, it eliminates the added cost of A/D converters needed in drive systems that connect to encoders using proprietary protocols. BiSS is hardware-compatible with the SSI protocol, simplifying integration.

More diagnostics than any other encoders:
The new ACURO Series offers more built-in diagnostics and alarms to monitor current and temperature than any other encoder. Optical sensors internally monitor the amplitude of the encoder signals, and exceeding the limit values will result in warning messages. A single-step code check ensures that the encoder signal reflects the recorded turn, bit by bit. The internal signal processing function checks each individual increment for possible occurrence after the previous event. Any violation of this rule, possibly due to disk breakage or mechanical overload, will lead to an alarm.

In addition, a self-monitoring feature checks the operating hours and signals a warning message to initiate preventive maintenance. What’s more, the BiSS protocol can report operation information that can be used diagnostically, such as torque, temperature, and acceleration.